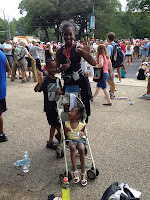 Kudos to the folks at the Competitor network for a job well done at the XSport Fitness Chicago Rock n Roll ½ Marathon.  20,000 runners participating in half marathon and mini marthon (5k) events.
The race was much better than expected.  Typically, I take the summer months semi-off as the Louisiana heat beats me down.  Since this race was in the relatively milder climate of my hometown Chicago, I decided to push through training in the heat and give this summer half mary a try.
Friday was the 15 hour drive, (yes 15 hours), with my husband and our 3 and 7 year old children. Can I get a medal for that?!  Actually, the kids were wonderful.  We took our time, made the best of the conditions and enjoyed the journey – my theme for this entire race weekend.
Saturday around noon, I took to the expo and stayed till shut down. It was fantastic.  The McCormick Expo center was a great location.  It was easy to get to, had abundant parking and public transportation options and the space was so large, no part of the process got congested.  There were over 60 vendors with a large variety of offerings. I learned a lot, sampled a lot, bought a lot and came upon a few items that will definitely make a difference in my fitness journey. I’ll share about them in upcoming posts.  The title sponsor XSport Fitness did their thing!  They had a huge presence with energetic and engaging staff, abundant giveaways, massages in a chair or on this vibrating machine (angelic choir singing) and on stage they ran almost constant demos of the various group exercise classes offered in their club.  So much fun.
Sunday, race day, the forecast was humid with a high of 95.  Arghhh.  Thankfully the timing and weather was on our side.  The race started early at 6:30. It was sticky but relatively cool.  The race organizers were ready.  A few days pre-race, they sent out an email with hot weather precautions and medical information.   The race course had several support stations. In addition to the standard water,  gaterade, and salt packets, some offered  ice, ice water, spray stations, cooling stations, ice water drenched sponges and towels. 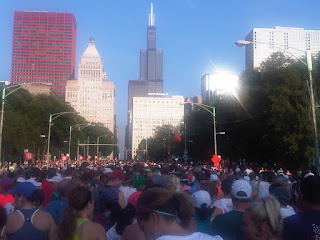 The wave start was very well executed.  I’m always near the back and by the time my corral makes it to the start, it is typically a muddled consistent flow of people walking then running across the starting line.  At this race, each corral walked to the start, stopped,  lined up and were held until the corral before them was about 1/3 of a mile away.  When my corral made it to the start, I was in the front row – toes on the starting line.  For me this was a new, clean and exciting start of race experience.  So much so, I got caught up and ran the intended 12:30 min first mile in 9:04. 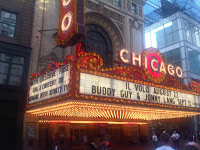 The race course turned and took us through and around downtown.  I greatly appreciated running past the famous and familiar landmarks and we got good breeze and shade running between the tall buildings.   This route was not good for Garmin.  My 405 kept losing signals and showed  me clocking several  7 min miles. (I wish!)
Cheering support along the course was mixed.  The bands were wonderful and the crowds were good sized but surprisingly calm and quiet. I’m used to huge cheer support and seeing a spectator party along the sides of the streets at New Orleans or Disney races.  I stopped and enjoyed some of the good support by dancing with one of the bands playing a RunDMC oldie and again to get some suga from the best cheering crew along the course (my husband and kids). 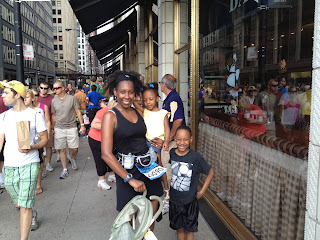 There were also some very helpful ‘coaches’ along the course.  I’m not sure if they were race workers or just very helpful spectators, but their info based encouragements hit the spot.  Ones that really helped  me were:  “Keep your head up, shoulders down, legs turning over and focus on your breathing.”  Said just as I noticed my shoulders stiffening and riding up.  And  “Smile! Photographer coming up on your left and ice water just around the corner.”  I love a picture and that cup of ice water mid course was liquid manna.  And “It’s warm out here runners. Listen to your body. There is a medal at the end for everyone who finishes regardless of time.” That nugget was just what I needed to hear as I rounded the turn along the stretch of full sun and set in heat for the last 3 miles of the race.
The secure area after the finish line was packed with medical personnel pulling runners aside for treatment, spray stations, photographers and folks handing out towels drenched in ice water, Gatorade, water, Jamba Juice smoothies, bananas, fruit cups, Marathon bars and of course the race medal.  This also was well planned. The length of the area was long enough to allow runners enough time to cool down/get themselves together and the number of volunteers moving people along prevented congestion. The post-race festival was a bit of a bust in that the only food I saw was a McDonald’s smoothie and a shortbread cookie.
If you don’t mind running in the heat, I definitely recommend this race.  It’s a big, fun, well planned, and well executed event.   I do mind running in the heat and my individual race was not so well run.  I set a goal to finish with an overall pace 1 min per mile slower than my last half (to compensate for the heat).  Refusing to hurt myself, I took it easy miles 2-10 and down to a walk/run when the heat got me miles 10-13.  This resulted in a time 3 mins faster than my set goal, but I did not like feeling the need to muddle thru those last few miles.  We’ll see how hot weather running goes next year.  If its good, Lord willing, I’ll be back to rock Chicago again.