Today I ran the Baton Rouge Beach Marathon and Half Marathon XIX.  It was my 11thrace, (4th half marathon), of 2012, my 7th half marathon overall and my favorite of this year’s group of halfs.

This uniquely Louisiana event was moderately sized at ~1000, almost equally split between the half and the full.  With the smaller size and having worked the expo the day before, I had the opportunity to talk with a lot of runners.  The variety was interesting – from 13 and 14 years olds knocking out the half in 1:35, to first timers, to members of the 50 States Marathon Clubwho have individually completed hundreds of full marathons.  Incredible. 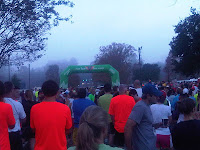 We kicked off at 7 am. The weather was decent.  Nicely cool and a bit misty at the start and throughout the duration of the half.  It did get a bit warm later impacting those in the full.
Just a bit after the start, not even ¼ of a mile in, I tripped over something in the street and fell.  It was one of those prolonged, try-to-catch-yourself stumble falls with a roll at the end.  What sounded like a hundred people in unison exclaimed “Ohhhhh!!!” as folks swerved to keep from trampling me.   A kind young man stopped and helped me up.  I thanked him, retrieved my cap, which popped off when my head hit the ground – (yep – it was that kinda fall) – and with an “I’m ok” I started back to running. I had slightly bloodied palms, right knee and left elbow, and I’d scraped up my right hip, my Garmin watch (boo!) and my right ear.    Over the next mile or so, I surveyed the damage and thanked God that:

The route is certified, fast, flat and very familiar.  It included the popular City Park lakes that I’ve done  a gazillion times, and areas of LSU and the garden district.  Running friend Vanessa took me along most of this route on last Saturday’s long run.  It was a blessing knowing the terrain. 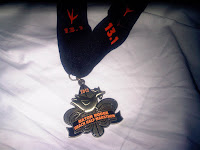 The people along the race were incredibly friendly.  I ran little portions with a couple from the 50 States Marathon Club met at the expo.  It was good conversation and a nice pacing push.  I was on target to knock 5 minutes off my last half PR up until mile 9.  I still don’t have that negative split thing down yet. My finish ended up 40 seconds off my last half (slower). I count it all joy considering my tumble start.
Post race eats were the best I’ve ever seen. No bars and a bottle of Gatorade here (errr hmmm – Rock N Roll Chicago Half…).   They had food – abundant Louisiana food including:  red beans and rice, gumbo, alligator sauce piquant, fried catfish, fried chicken, french fries, fried cheese sticks, jalapeno poppers, jambalaya, pastalaya, water, Powerade, a selection of sodas and beer.  Oh, and they also had bananas and oranges.  Admittedly, for me it was a bit too soon after the run and too early in the morning for a chow down, but I did sample and thoroughly enjoy a bit of a couple of items.  In addition to massage tables, (I got some quick work done on my hamstrings), they had mats laid out facing the lake and held free yoga/stretching classes. The view of the lake with all the migrating pelicans was gorgeous. 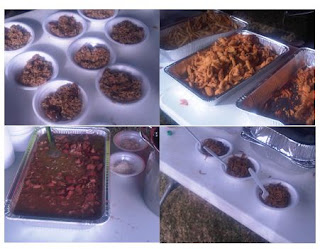 The expo, race route and festival location had a lot of ouber friendly, witty and hustling volunteers. I think a large part of this collection of great folks is due to the great leadership of this race.  I met one of the three people that run this event, race director Craig Watson, a few weeks ago.  He has personally run over 180 full marathons and it is clear he is passionate about running and loves people.  He engages and takes time/interest in people individually.

The following is from a email thank you sent to all the runners:

THANKS FOR RUNNING BATON ROUGE BEACH MARATHON AND HALF-MARATHON!!!All the people in our organization would like to thank you for your participation and your enthusiasm toward our race!!! We all try to do a good job for the runners and we hope you think so too.

Next year will be our 20th anniversary and it will be run on December 7, 2013. We all hope to see you and your friends come to Baton Rouge and participate in it.

This race is put on by fifty staters who try to be different. Where else do you get fried fish, alligator sauce piquante, gumbo, red beans and rice, and pastalaya after a race? and get fed the evening before the race? for free?

We hope to see you next year and thank you for all of your support!

I can see why people want to work along side him and felt the care that went into  this event.

The Baton Rouge Beach Marathon and Half Marathon has knocked most past races down a notch on my favorites list.   What a cool bonus it’s a local race!   I highly recommend this event and look forward to the 20th year event in 2013.