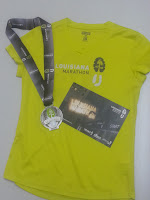 The Louisiana Marathon is a weekend of events including a 5k, Kid’s Marathon, Half Marathon, Relay and Full Marathon.  It’s a gem of an event, that displays the culture, cuisine, beauty, fun and smallish feel of Baton Rouge, along with much of the excitement, perks, organization and opportunities of a large production race.  Their theme was “Run, Eat, Dance, Laugh”.  Pick your passion here.

The Advocate Cypress 5k was held Saturday morning, January 19th, at the location of Sunday’s Half and Full Marathon events.   The course is not particularly pretty – downtown Baton Rouge, but the integration into the weekend, (i.e. expo, honkin medal, admittance to Sunday Finish Festival and celebration etc), made it a much grander experience than the typical stand-alone 5k event.  It’s a really nice choice/experience for those wanting to do a 5k.  An award was given to runners who ran both the 5k on Saturday and the half or full on Sunday. (Not sure what it was, but it looked like a crawfish tray. Very useful in these here parts.)

The Advocate Kid’s marathon was grin-till-it-hurts cute.  There was a 9 week or 4 week program, where the children ran a bit each week and finished up with a .5 mile or 1.2 mile run race weekend.  The training packet for the children was informative and did a good job encouraging healthy living. The kid’s medal was NIIIICE (liked it better than my full medal) and the participation was great – everything from Moms and Dads run/walking with their little ones to emerging athletes killing that race course.

Our kids participated in the activities.  Our son ran.  So proud of him.  Our baby girl – she mostly ate.  So nice to see your traits in your children – smile.  Next year, she’ll be in the race as well (she’s not a baby anymore, time to step up LOL).  One area of improvement was the control of children leaving the secured race area. The plan was for children to remain in the chute until a race rep matched the number on the child with a number on a wristband the parent was to wear.   That was not happening consistently. Safety stuff around children wigs me out a bit.

The expo and packet pick up was held at the Belle of Baton Rouge Atrium.  There were ~50 vendors, pasta dinner, live entertainment etc.
Sunday’s events were the half and the full.  I ran the half in last year’s inaugural so I stepped up and made this second year’s race my second full marathon.
Last year the post race festival was amazing with many different local restaurants showcasing scrumptiliousus Creole/Cajun foods.  This year – this is what I saw. 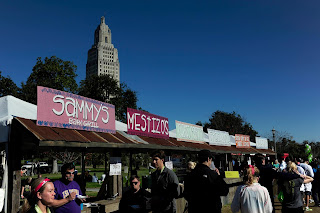 Notice no people behind the counters serving food. The vendors along the food row were packed up and gone. Another hint I need to improve my pace???? Not cool. Thankfully, the wonderful people from the Jamabalaya Festival were still there, serving up bowls of delicious jamabalya and jambalaya pasta.  My family and I went to the Half Fanatic/Marathon Maniac tent and met members from across the nation, enjoyed the varied food items there (including some delicious king cake) so it was not a loss. Bling and post race food are biggies for me. 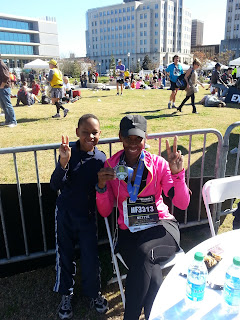 All considered – I adore this race and am so happy it is in my hometown.   Despite my funk and performance, I learned a lot, and God willing plan to run in this event each year.
Looking to run in Louisiana?  Please consider this race. BTW – Registration for the January 17-19, 2014 events starts today at http://www.thelouisianamarathon.com/