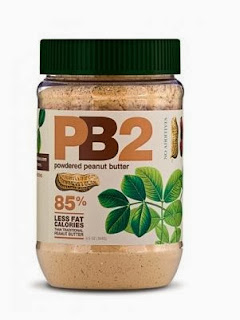 Love peanut butter but not too happy about the caloric and fat content?  Check out PB2.
I know, once again, I’m probably late to this diet friendly food find game, but I somewhat recently discovered this powdered peanut butter manufactured by Bell Plantation, Inc. called PB2.  It’s slow roasted peanuts that have been pressed to remove 85% of the fat and oil.  PB2 is a powder that can be reformulated with water to make it creamy – or you can add it into recipes like smoothies or baked goods for rich peanut butter taste without most of the fat.
This reminded me of Tang and my initial thought was to take a  pass as I try to stay away from processed and eat foods close to the way God put them here. However, the creation of PB2 is chemical-free and the processing improves the overall nutrition profile of the product.  PB2 is “all natural, preservative free, and contains no artificial sweeteners. And that makes it a sweet alternative for active lifestyles, dieters, and moms who want healthy snacks for their kids.”  (Statement from their website).  The product is made by an agricultural research company devoted to rethinking the uses of traditional farming products to help sustain and increase profitability for our county’s family farmers.  All that considered, I picked up a jar and gave it a try.
So far, I haven’t used it as a standalone product (and I doubt I will) but I have used it several times as an ingredient. 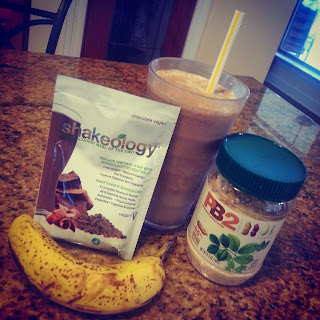 In my Shakeology – PB2 is wonderful!!!!!!  I add 1 tablespoon into the blender with other items in my morning smoothie recipe.  It adds a lovely roasted peanut flavor with only 23 calories and <1 gram of fat vs. 95 calories and 8 grams of fat in 1 Tbsp of regular peanut butter.  I noticed no difference in taste or consistency. I’ve also tried a bit of PB2 in oatmeal.  Another tasty use.
On their site, it’s a PB2 party. The product makers and users have posted dozens recipes of all types of foods made with their Peanut Butter Powder including desserts like PB2 cheesecake, PB2 peanut butter cookies and PB2 protein brownies; breakfast items including PB2 smoothies, PB2 granola, PB2 banana pecan muffins and PB2 protein pancakes, even soups and entrees like Spicy PB2 Vegetarian Chili, PB2 Curry Soup, Slow Cooker Easy PB2 Thai Chicken and Creamy Italian Pork Chops with PB2.  Sounds interesting right?  The volume and variety of recipes was surprising and many of them looked  good.   I’m  gonna  give several of these a whirl.
Do you PB2?  If so, what is your favorite use of the product.
Oh – BTW, it comes Chocolate as well! (little kid smirk)