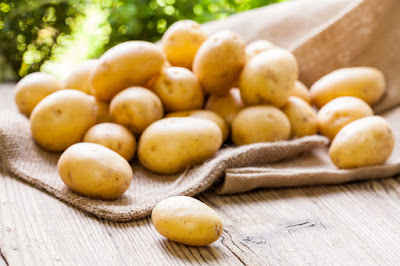 Happy National Potato Day!
Yep – such a thing exists.
When I think about it, this is not much of a surprise.  Some say the potato is American’s favorite vegetable, with an estimated 456 billion pounds consumed in this nation each year.
Fried, chipped, hashed, smashed or mashed – I enjoy them all from time to time.  But by far, my favorite potato preparations are in a soup (paired with leeks or broccoli) or baked.   A fluffy, baked potato is hard to beat.  It is filling, and the subtle flavor of the potato goes where ever you desire – just change up the toppings.
As much as I enjoy baked potatoes, I rarely made them at home.  It takes a long and mine were usually a bit dry and mealy. Out at restaurants, the texture was on point, but the potatoes are typically too large and too loaded with high fat, high sodium ingredients.  Ever had (or seen) a Jason’s Deli baked potato?
A few simple changes have put baked potatoes back on a reasonable rotation in my eating.
Change 1: To beat the time and dry/mealy issue, I ‘bake’ them in my pressure cooker instead of the oven. 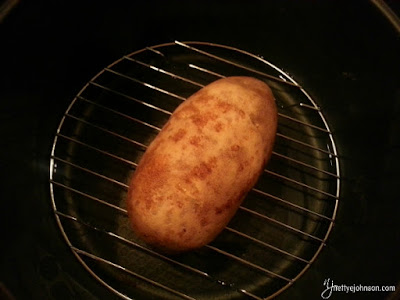 Scrub the potatoes clean, poke a few holes with a fork and place on a steaming rack in pressure cooker with about 1 cup of water.  Bring the cooker to pressure and cook for ~ 20 minutes.  Let the steam release naturally before opening. The outcome – a super fluffy potato in about 1/3 the time of the oven baked method. 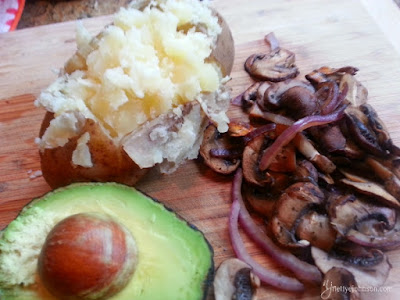 Change 2:  A few topping swaps keep the potatoes in line with my plant-based eating focus.

Instead of butter and sour cream, I use avocado and a bit of salt.  It adds creaminess and a delicate flavor that in my opinion beats the boots off the dairy standards.  Plus, consider this nutrition element:
1 tbsp (14.2g) of  butter has 7 grams of saturated fat
~1 tbsp (14.6g) of  avocado has 0.3 grams of saturated fat
A good to you and good for you swap.
Next load it up with veggies.  In this case, I added sauteed baby bella mushrooms and sweet onion. 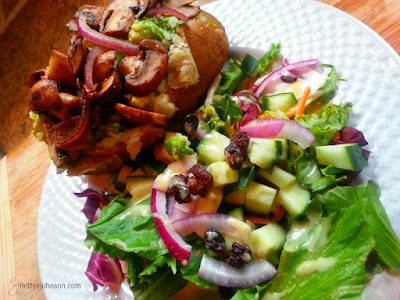 A good plate!
Other swaps:
Want salty? Instead of bacon, consider capers or olives.
Want cheesy? Instead of cheddar, consider Parmesan Reggiano, blue cheese or Swiss. These varieties have bold flavors, so a little goes a long way. To skip dairy, try nutritional yeast.
Want variety?  Top with hummus and marinated artichokes or black beans with salsa and guac. Herb and spice toppings are also the bomb.  Rosemary marries perfectly with potatoes; paprika or jerk seasoning give a delicious kick.  Basil with tomatoes, olive oil and a bit of garlic – also very yummy.
What are your favorite non-typical toppings?