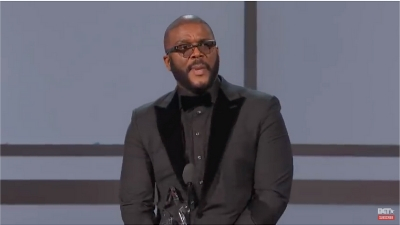 Tyler’s acceptance speech was poignant, powerful, and took us to church.

If you missed it – watch. If you saw it, you know it is worth watching again. (A transcript of Tyler’s speech follows.)

Be inspired and be about doing what you were made and equipped to do to ‘help somebody cross’.

The words of Tyler Perry accepting the BET Ultimate Icon Award on June 23, 2019.

Thank you. I want to say a special thanks to BET, my new family. I can’t wait to get started over there with our new shows.

Thank you so much for this.  To Scott and everybody over there. Thank you so much. To Viacom.  Shiary (sp) who’s here. Bob. Everybody, listen from my heart. I want to say thank you.

I couldn’t help but think about my mother.

I couldn’t help but think about my mother. I remember being a kid about five years old. She would take me into the projects with her when she played cards on Friday nights with a bunch of women.

Now, these women didn’t have more than a 12th-grade education, but they were smart black women. They were powerful black women. They had great stories to tell, and I was a five-year-old kid sitting there on the floor playing with my matchbox cars, listening to them talk about their men, their relationships and their pains, and when one of them would get really sad, another woman would come in and make a joke and they’d all start laughing.

I didn’t know I was in a master class for my life.

I would get home, and my father would be beating my mother and doing all kinds of things and saying all kinds of stuff to her, and he would leave the room, and I’d walk in, and I didn’t imitate one of those women, and she would start laughing. There was a power in that that I didn’t really get until I got older.

I remember being about 11-12 years old on my way to my new school, and I got to this intersection. I had to walk past pimps, prostitutes, walk through… literally walk through a graveyard, get to this intersection, six lane intersection. There was a man standing there saying, “will someone helped me cross, will someone help me cross?” And there were all these people that kept passing by him and passing by him. I said, “I’ll help you cross.” So, he told me he was going to my school, and he was going to sell candy there. That’s how he made his living. So I helped him cross the street to get there. We became good friends. His name was Mr. Butler.

That moment reminded me of my mother, bringing her out of pain into laughter to help her cross.

My first ten movies where all about her subconsciously wanting her to know that she was worthy. Wanting black women to know you’re worthy. You’re special. You’re powerful. You’re amazing.

All of that was about helping to cross.

I started hiring people like Taraji and Viola Davis and Idris Elba. They couldn’t get jobs in this town, but God blessed me to be in a position to be able to hire them. I was trying to help somebody cross.

When I built my studio, I built it in a neighborhood that is one of the poorest black neighborhoods in Atlanta so that young black kids could see that a black man did that and they can do it too. I was trying to help somebody cross.

The studio was once a Confederate army base, and I want you to hear this, which meant that there was Confederate soldiers on that base plotting and planning and how to keep 3.9 million Negroes enslaved. Now that land is owned by one Negro.

It’s all about trying to help somebody cross.

Because what I know for sure is that if I could just build this table, God would prepare it for me in the presence of my enemy.

Rather than being an icon, I want to be an inspiration.

So thank you BET my new family. Thank you, everybody.

I want you to hear this. Every dreamer in this room, there are people whose lives are tied into your dream. Own your stuff. Own Your Business. Own your way.

I love you guys.