A few years ago, The Biggest Loser and Dancing with the Stars shared the spot as my favorite TV show.  The discipline and transformation shown in both programs got me and I often thought how cool it would be to spend a week, (just 1), at either The Biggest Loser Ranch or in a DWTS studio learning a Pasa Doble or Jive.

Since that isn’t going to happen, when NBC Universal Television Consumer Products partnered with former “The Biggest Loser” Contestants Jackie and Dan Evans to launch a series of RunWalk events, I took a look because it’s the closest I’d get.  These events are designed to serve and encourage walking and running for people of all fitness levels and they brought an inaugural event to the capital city of Mississippi.  I love Mississippi. My family roots are there.  For the 6th year in a row, that state has the highest obesity rate in the nation. (Louisiana, my home state is 2nd). I’m all in for events to help end death by couch and fork, so it was an easy decision to go up and support this activity and awareness run.   I signed up, (caught a 50% off registration deal – yay), and completed the 15k on Saturday November 3rd.
Friday Nov 2nd– After school we loaded up the car and the kids and hit the road, arriving in Jackson, MS around 7 pm for the expo that ended at 8 pm.  Calling the expo an expo is a stretch. I recall seeing  a bounce house for the kids and 3 or 4 vendors advertising for other local races and a local grouponish company sign up. No biggie. This was the first year for the event and vendor participation will probably grow going forward.  The highlights were the warmth and availability of Jackie and Dan and the EONI eats.  When we arrived Jackie and Dan were conducting a talk and they were so open and hospitable with the crowd.  EONI (Earth’s Own Natural Ingredients) is a relatively new company that produces all natural baked goods.  EONI sampled little bites of their natural cake products.Their lemon berry cake and coffee cake was sit down and savor good.  Super moist, not overly sweet and you could taste the freshness of the ingredients. Really, they were the best lemon and coffee cakes I’ve ever had.  The representative said they are working to get picked up by a grocery chain. I wish them the best.
We stayed at the Hilton Garden Inn King Edward Hotel  due to HHonors points and the close proximity to the race start at the convention center.   It was a beautiful old hotel that had been recently renovated. A handout at the check in desk informed of the hotel’s rich history and inclusion on the National Registry of Historic Places. After settling everyone in the room, I went back down to get some of the fresh cookies (for the kids – really!), and met some nice talkative folks in the lobby.  They informed that the hotel also supposedly has a ghost that hangs out on the 3rd floor.  LOL.
Sat Nov 3rd – The race started at 9 am which was a bit concerning considering the expected high of 84 degrees.  Thankfully temps move slow in Jackson and the weather remained pleasant the entire morning. Overcast and I guess high 60s/low 70s. 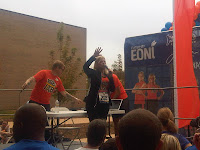 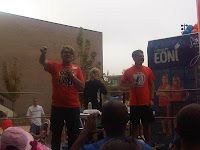 The race was small with a little over 500 participants between the 5k and 15k events – and wonderful. The whole time, I felt like I was getting a big ole hug.  Mississippi people are some of the nicest people you will ever meet and that welcoming spirit was all over the place.  The event was designed to accommodate all levels.  The race had 6:30 min/mile pace runners to people starting their path to activity by walking their first 5k. Running events always have great support and camaraderie, but at this event it felt a bit extra as many shared the common bond of a health and/or weight loss journey.  Dan and Jackie knew how to engage the audience.   They made it very personal by inviting people from the crowd to come up the mike, introduce themselves and share their progress.  Stories like 108 lbs lost and tackling this as their first race to a woman who lost 105 lbs and has completed many races including several full marathons. Very encouraging stuff.

I was impressed when Harvey Johnson, the Mayor of Jackson,  took the mike.  He showed us his new running shoes and shared that this would be his first 5k. I’m paraphrasing here… He talked of his support of the event and other such efforts in the city and his hopes that it was the start of continued strides towards better health and fitness for all involved.  I was pleasantly surprised when I ran into Ms Lorita, a fellow BGR! Baton Rouge member who drove up for the 15k.  Dan sang the national anthem, the bumping music cranked up and we were off. 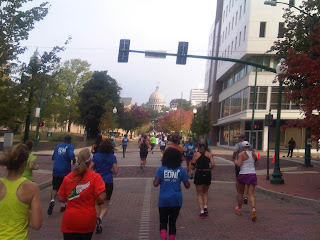 The course was an out and back through downtown Jackson and down along N State and Old Canton Road. The areas we ran contained a lovely mixture of old and newer architecture, sprawling mansions and beautifully maintained green space.  It was also hecka hilly.   Just about the entire race was running up and down hills.  Not quick overpass type inclines –  long ascents and descents one after another after another.  There are no hills where I live, run and ‘train’ so this was big time new to me and a big time surprise to me was that I loved it. The first 5 miles, I was able to power thru the hills. On the backside 4+ miles however, I transitioned to my version of a Jeff Galloway Run/Walk regime. I’d slog (yes slog) up the first half of the hill, power walk the second up half of the hill, kick it on the downside of the hill and push on the few beloved flat spaces in between.   Months ago, I would have fussed and griped the whole time.  I think I was able to embrace the hills because of the immediate attitude adjustment – I told myself this is a ‘beneficial variance to my training routine’ (used those words in my self talk).   I’m sure it also helped that I’m about 15 lbs lighter and a lot stronger now than I was months ago due to better eating and my strength training routine.  I thank the Lord for the change in mind and body.
The race had some very nice race perks: 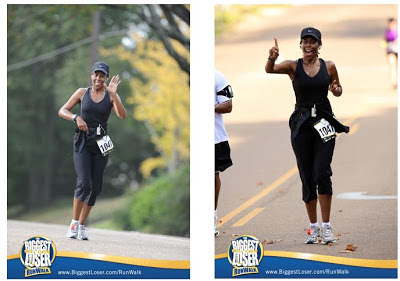 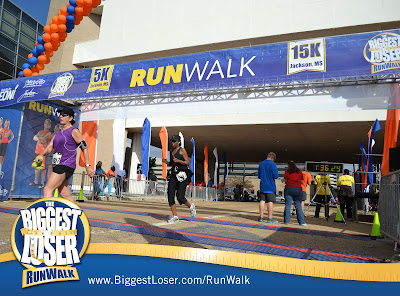 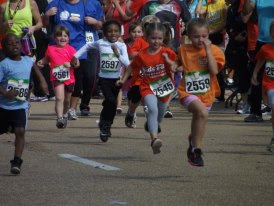 I was so excited and proud to run this with my son.  Jabari was also, the whole time leading up to and preparing for the race.  During the race – not so much.   No matter how many times we went over and practiced pacing for endurance, that child – along with almost all the other kids – started sprinting at go, got tired and then frustrated at having to walk/run to complete.  His enthusiasm returned when the medal was placed around his neck.  This was his second race. He does not remember his first, a 1 year old toddler trot at the Disney Marathon weekend in 2006.  I’m sure it won’t be his last. 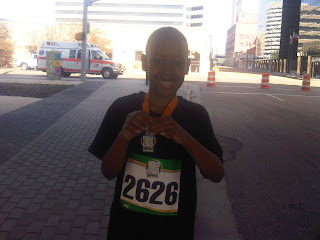 My 15k race results:
The Biggest Loser RunWalk was a well organized and warmly executed race. I thoroughly enjoyed this event and prayerfully my family and I will be back.